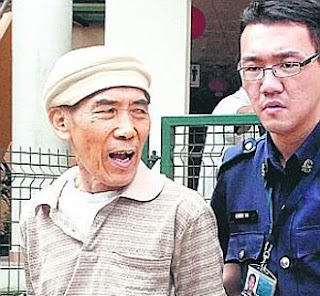 This is Ong Kah Chua who they said give Yio Chu Kang MP Seng Han Tong fire perfume. The fucker go and pour dunno what kerosene or thinner down Ah Seng neck, then use lighter and light it. Ah Seng was giving ang pow at the CC when he kena burn.
KNNBCCB! Other country the angry people throw shoe at President Bush, who will guess Singapore also got this kind of big balls (or small brains) person do this kind of thing!
This MP Ah Seng also damn suay. First time kena whack by taxi driver get black eye, now kena burn by Wong Fei Hong.
Must be the MP damn guai lan or else how come got TWO fucker want to whack him? They change the law to make those who whack MP get 20 fucking year jail because of this MP. Now they have to change the law to say burn MP will get hang first then caning lah! 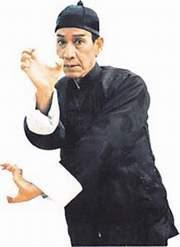 You don't think the MP-burner look like Wong Fei Hong meh? Look like right? The Kwan Tak Hing version!
I think must be his half brother or half father, man.
Some people say our MP is kanina nua kind, chor boh lan fuckers. But you can see this Ah Seng MP is very warm to the people and got burning passion to help his resident. Hahahahahahaha!
Get well soon, Ah Seng ok? Ask for transfer when you come out, don't do Yio Chu Kang anymore! Better tell PM, "Oi! Ah Long! Limpeh sian liao! KNN! Yio Chu Kang got too many mental patient and old people who hate me! Transfer me go to Tanjong Pagar! There the resident scared of Lau Lee so won't burn their MP one!"
The economy must be damn fucked up, man. If gahmen cannot see the people are damn tulan, damn angry, then the gahmen is blind. It is easy to say the Ong is siao one, mental hospital patient. But I think got many normal people also angry about gahmen do fucking nothing to help them.
Next time the Meet the Peoples session by MP will have new rule! MP must wear fire proof jacket and surround by Gurka police (but not from Whitley Road ISD branch, those Gurka is fucked up)! Resident want to see MP must kena strip and search see got lighter and kerosene hide in their body or asshole! Gahmen will make sure your backside never hide any weapon.
Don't worry Gahmen very experience in fucking Singaporean backside one!
Hahahahahahahahahaha!
I show you another photo of Kwan Tak Hing. Really look like the Ong Kah Chua guy, right? 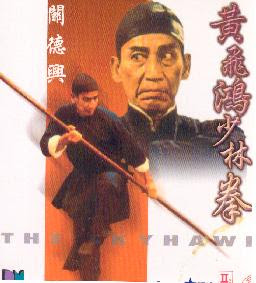 you make me laugh so much hahah thanks rockson!

KNN rockson. You rocks and you are damned comical. lols.

it is not that they don't know or blind, it is they choose to ignore if not how? use own money and help the people?

siao bo? we must understand why did they join in the 1st place.

just like your friend owe alot of money hint to you to help, you also choose to pretend dont know ma, right bo? if not how? help him is as good as money throw into sea, don't help people say you no loyalty, so dont know is the best lor.

Rockson, I am so so pleased that you are blogging more regularly again. You crack me up each and every single time. xxooxx your female fan

think the sg wong fei hong has not mastered the no shadow legs....if mastered, may not have been caught.....

Hahaha... Well Done Rockson, You did it again. Actually, this mp must be very straight in his talking. He keep trying many pattern on the Komfort Taxi to earn more money , never even bother about the consumer pay n pay....so now he get it lor..

Seng Han Thong is one of this type!

The people has been enduring for too long and pushed to the limit!

You got to be Singapore's best blogger la. Dare to blog about anything and everything.

Rockson! check this out! its really funny!!

haha! i will fall off my chair laughing if i am sitting on one while reading ur entry...

Nice story you got here. I'd like to read something more concerning this theme. Thanks for giving that data.
Sexy Lady
Call girls

Cool aricles you place here.
It will be intresting to read something more concerning this article.
Thnx for giving that information.
With best regards Margo!!
Ukrainian escort service